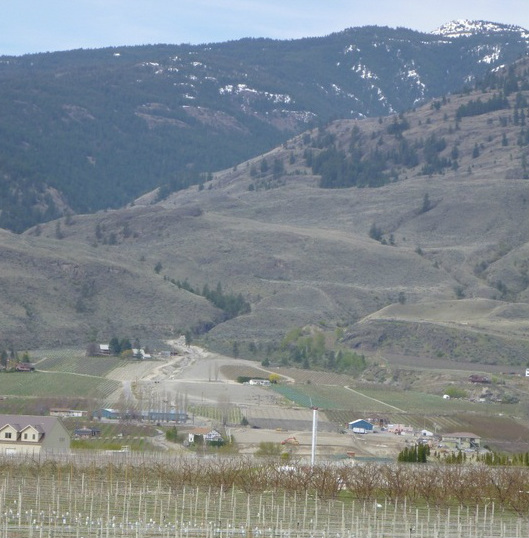 On June 15 2010 a large debris flow was initiated by the breach of the dam on Testalinden Lake and flowed through the Testalinden Creek valley until reaching the valley bottom and flowing across Highway 97.

The dam failure was caused by warm weather leading to rapid melting of the high elevation snowpack in the area of Testalinden Lake combined a non-functional culvert and spillway. The dam breach release about 20,000 cubic metres of water, however, once the flow reached the fan at the valley floor 8 km away, the total volume of water and entrained debris was estimated at greater than 200,000 cubic meters. The flow of material blocked Highway 97 and destroyed a number of homes and buildings and affected a large area of agricultural land. No injuries or loss of life were reported.

Alluvial fans are a common feature in the high-relief valleys of the BC interior and are often considered prime agriculture and residential locations due to lower slopes. It is important to be aware of the hazards present when living on these features. The Tannant and Skermer article referenced below provides a number of examples of these types of events in the Okanagan as well as greater detail and photos about this event.

Morhart, D. 2010. A review of the Testalinden Dam Failure. Report by the BC Deputy Solicitor General.  http://www.ag.gov.bc.ca/reports/info/testalinden-slide-failure-review.pdf 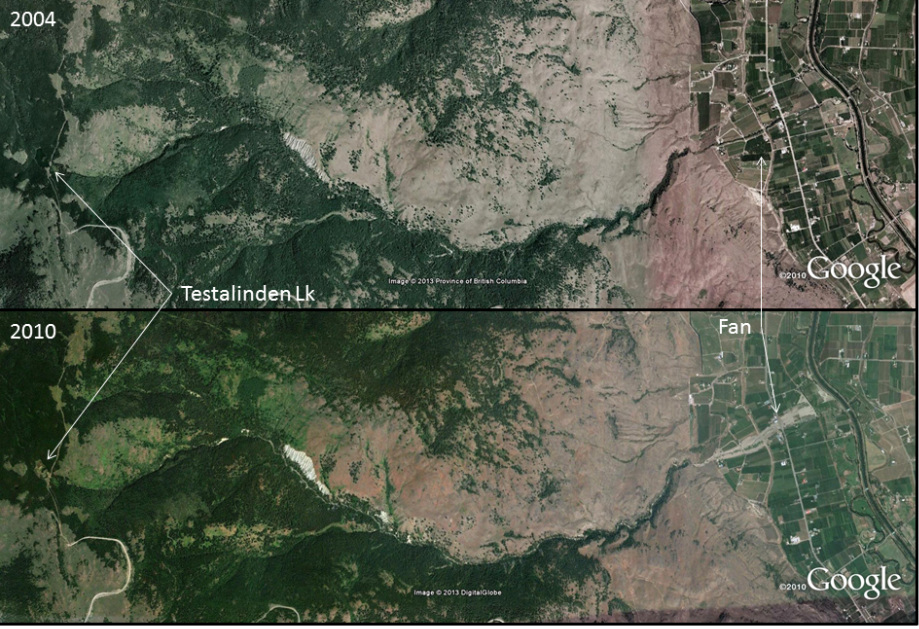 Before (2004) and after (August 2010) satellite images of the Testalinden Creek watershed and debris flow. (Images: Google Earth)

Before (2004) and after (August 2010) satellite images of the Testalinden Creek fan. Note the flow of material crossed Highway 97 and reached the banks of the Okanagan River. It's unclear as to whether any material entered the river due to protective dykes. (Image: Google Earth)
Powered by