Seen on the east side of Okanagan Lake as you arrive in Penticton from the north is Munson Mountain, with its iconic PENTICTON sign marked on the hill slope.  Munson Mountain is protected as a city park, and features a trail to the summit lined with benches and viewpoints. The view from the summit of Munson Mountain was immortalized on the back of the Canadian $100 bill from 1954-1973.

Munson Mountain is an extinct volcano

Munson mountain is the remains (volcanic core) of an extinct volcano that was active around 55 million years ago. Munson Mountain was active during the same time period as other Okanagan Valley volcanoes seen today: Giant’s Head in Summerland, Mt. Boucherie in West Kelowna, and Knox Mountain above the city of Kelowna.  These volcanoes are of the composite/stratovolcano types like those seen along the west coast of North America. The rock is of the Marama Formation of Eocene age and is primarily dacite (felsic) in composition.

Interestingly, the volcanoes actually developed and were active far to the east of their present positions. As the Okanagan Batholith and Okanagan Metamorphic Complex rose from deep within the earth, creating the Okanagan Fault, the pre-existing volcanic features slid westward. Hence, the roots of Munson Mountain are likely 80-100 kilometers to the east of the present position of the mountain. When walking along the shore of Okanagan Lake below Munson Mountain there are outcrops of granitic rock (not volcanic) that indicate that Munson Mountain is stranded above dissimilar rock and has been moved to the west. 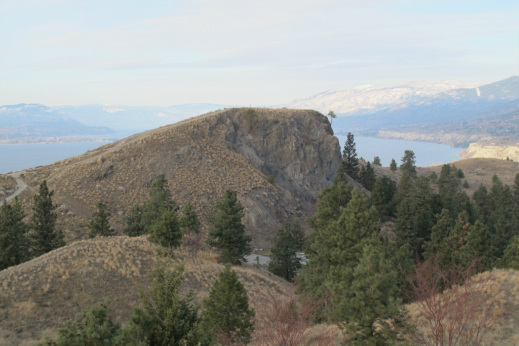 Main peak of Munson Mountain viewed from the east side. (Photo: T. Redding)
Munson Mountain doesn’t look much like a volcano anymore. This is due to the erosive power of rain, wind and glaciers. Multiple glaciations have worn away most of the mountain over the past few million years. Evidence of the most recent glaciation is visible in the silt cliffs at the base of the mountain and above the lake surface. These cliffs are sediments deposited during the waning stages of the last glacial period (around 13,000 to 10,000 years ago) in a glacial lake present in the same location as the current Okanagan Lake. These fine-textured glacial lacustrine sediments underlie portions of the Naramata Benches which are well known for the wine and fruit production that takes place in the rich soils. 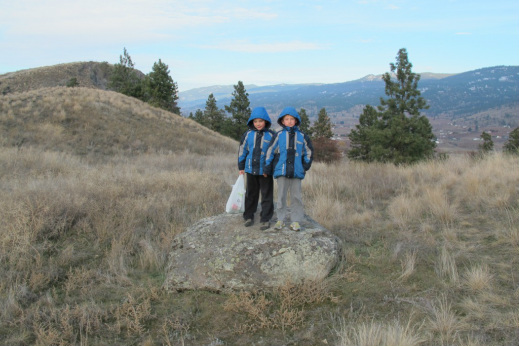 From the late 1800’s through to about 1952, there was a mine intermittently active at the base of Munson Mountain along the shore of Okanagan Lake. The location of the former mine entrance can be seen through a viewing device (pipe aimed at the former mine adit which is now buried and inaccessible) located by the SS Sicamous along the Okanagan Lake beach. Also located at the SS Sicamous is an old ore cart from the mine. 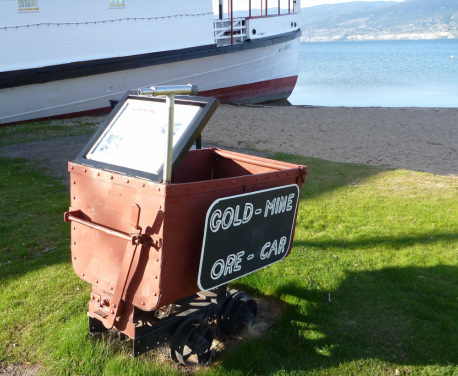 The Okanagan Mine (also called the Torpedo Mine and Lakeside Mine) was operational off-and-on from the late 1880’s through the mid-1950’s. It is not known how the ore-bearing vein was originally located. The vein being mined contained antimony, gold, silver and copper, and was located in a shear zone between two granite walls. It is really interesting that the mine was located in granite, while Munson Mountain above is volcanic rock. The reason for this discontinuity is the Okanagan Fault which runs through this area. The mine is presumed to have been abandoned in 1952, and it has likely since filled with water.

Pen Henge is an inconspicuous standing stone array at the top of Penticton’s Munson Mountain.  Like its much grander and ancient counterpart in southern England, Pen Henge serves as a season tracker.  The array consists of four markers: a reference (or “heel”) stone, an equinox stone, a winter solstice stone, and a summer solstice stone.  On the equinoxes and solstices, the Sun sets, as seen from the heel stone, directly over the appropriate marker.  Likewise, at the moment of sunset on these cardinal dates, the elongated shadow of the appropriate marker stone falls directly upon the heel stone.  This physical illustration of the passing of the seasons helps the modern civilian appreciate how early civilizations planned for the next season without the help of mechanical time-keeping devices.  On any day of the year, the casual observer, standing near the position of the heel stone, can turn their gaze from the winter solstice stone to the summer solstice stone, and have it impress upon them just how great a difference there is between the winter and summer sunset positions.  Nature provides a natural and high-precision calendar of which most people today aren’t aware, and Pen Henge is doing its part to celebrate this ancient wisdom. 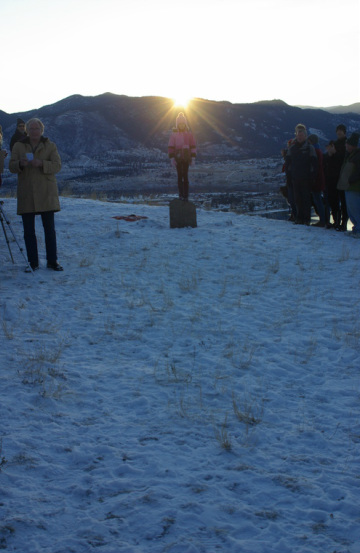 The picture above shows a student standing on top of the winter solstice stone at sunset on December 21, 2011. The picture was taken from directly behind the heel stone. (Photo R. Ransom)
Powered by