The silhouette of McIntyre Bluff viewed from Vaseaux Lake. (Photo: T. Redding)
McIntyre Bluff is an approximately 300 metre tall cliff between Vaseaux Lake and Oliver. The bluff is composed of granitic gneiss (metamorphosed granite) and migmatite (a mixture of igneous and metamorphic rock) with veins of quartz and feldspar. The rock is of the Okanagan Metamorphic Complex and is of Paleozoic (543 - 251 Ma) and Mesozoic (251 - 63 Ma) age. It is thought that the cliff was carved over the course of repeated glaciations.

McIntyre Bluff is located at the narrowest part of the Canadian portion of the Okanagan Valley. It is hypothesized that this was the location for the ice dam that resulted in the formation of glacial lake Penticton and the silt bluffs that occur along the valley sides to the north. 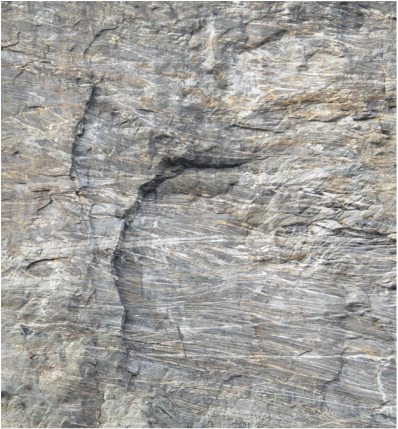 Granitic gneiss with quartz veins. Veins crossing each other is indicative of multiple periods of injection of geothermal fluids. (Photo: T. Redding)
Powered by