Mahoney Lake panorama. July 2013. (Photo: T. Redding)
Mahoney Lake is a relatively rare example of a meromictic lake which means that it the water does not mix between the surface and depth, leading to large changes in chemical properties with depth. It is not clear as to why the lake does not mix, however the location is relatively sheltered from wind which may contribute.

Mahoney Lake does not have an outlet (like White Lake and Spotted Lake), so due to the high evaporation in this area, dissolved minerals accumulate in the lake over time, especially salinity and alkalinity. The pH of the lake varies from 7.5-9.0 and the total dissolved solids range from ~10,000 mg/L near the surface to ~85,000 mg/L near the bottom (sea water is ~ 35,000 mg/L).

Due to the high pH and salinity of the lake, a nearly continuous mat of purple sulphur bacteria occurs across the lake at various times of the year.  Apparently this is the best example of this bacteria known globally.

The lake is in a kettle basin formed during the last glaciation. The geology of the watershed is dominated by the Marron Formation volcanics which provide an alkaline rich rock source for the dissolved minerals.

Mahoney Lake is an Ecological Reserve, and as such is a protected habitat and visitors are encouraged to stay away from the lake shore as damage to the muds and movement of invasive species are a problem. 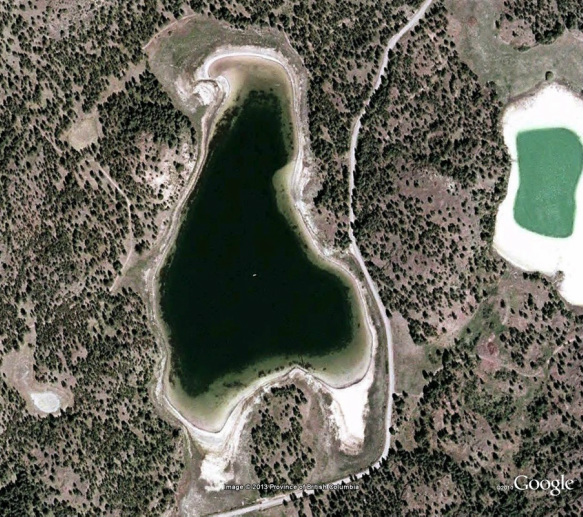