Haynes Point cuts across Osoyoos lake, nearly blocking the passage of boats during times of low water. Historically the point was used as a ford to cross the lake. Dredging close to the eastern shore of Osoyoos Lake is required to keep passage open across the feature.

While Haynes Point looks like a sand bar, it is not. It also looks a bit like an esker, but it is not. The material that makes up the point is quite coarse textured (gravel size and larger) which is too large to be moved by the relatively weak currents within the lake. Haynes Point is related to the origin of Osoyoos Lake as a glacial kettle lake. At the end of the last glaciation, really large chunks of ice were left behind in the valley bottom with sediment. When the ice melted, it left depressions in the sediment which formed Osoyoos lake. The ice forming the kettle would have had large cracks or crevasses in it which filled with sediment during melting, and once the ice melted away, the sediment was deposited and crossed the lake.

Haynes Point has also been "improved" by the addition of mine waste rock in the mid-1900's. 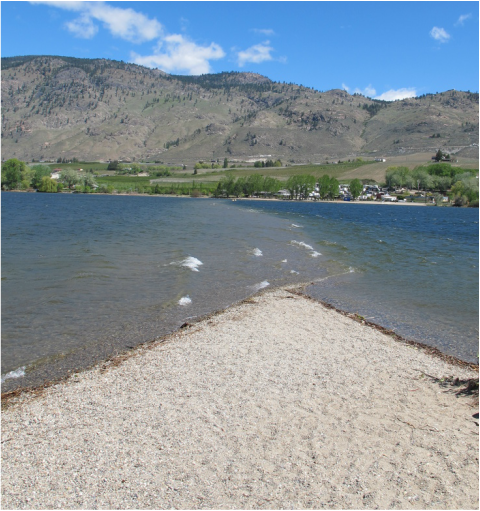 View to east along Haynes Point. Note the shallow water extending almost across the width of the lake. (Photo: T. Redding)
Powered by