This section provides a brief timeline of the geologic history of the main events that have shaped the south Okanagan as we can see it today. For more detail please see Cannings (2009) for a clearly written narrative description and Roed and Fulton (2011) for detailed descriptions, diagrams and maps. The most up-to-date and comprehensive map of the bedrock geology of the Okanagan Valley is Okulitch (2013). For a provincial geologic history, see Cannings and Cannings (2011) and for a focus on southern BC, see Mathews and Monger (2010).

The timeline presented below is arranged from oldest to youngest, so the most recent geologic events are at the end. A simplified geologic map of the South Okanagan is provided below.

180 to 60 million years ago (mya) (Jurassic Period)
Accretion of terranes onto the west coast of North American continent. This was the process of a number of micro-continents and island arcs being crushed into the western side of the continent. This is one of the reasons for the north-south alignment of mountain ranges in BC and the fact that the ranges features different rock types.

55 to 34 mya (Eocene Epoch)
The Eocene was a very active period in the evolution of the Okanagan landscape.


36 to 24 mya (Oligocene Epoch)
Uplift of metamorphic and plutonic rocks leads to development of Okanagan fault. The Okanagan fault resulted in westward movement of rock materials of up to 100 km. The fault is the reason for the major differences in rock types on the east (metamorphic and plutonic) versus the west side (sedimentary, volcanic, plutonic).  In general the fault follows the centre of the valley south into Skaha Lake and then zigs and zags a bit through to Osoyoos. The Okanagan Valley Fault is classified as a normal fault, with the hanging wall to the west and the footwall to the east.

2.5 mya to 10 kya (Pleistocene Epoch)
During this time period there were a number of glacial and inter-glacial periods. The most recent (Fraser) glaciation occurred from 25,000 to 12,000 years ago, and is the event that we know the most about as succeeding glaciations tend to destroy evidence of earlier glaciations. Evidence of the Fraser Glaciation is clearly visible in the silt cliffs along Okanagan Lake and the sculpted bedrock landforms such as Giant's Head and the Skaha Bluffs. 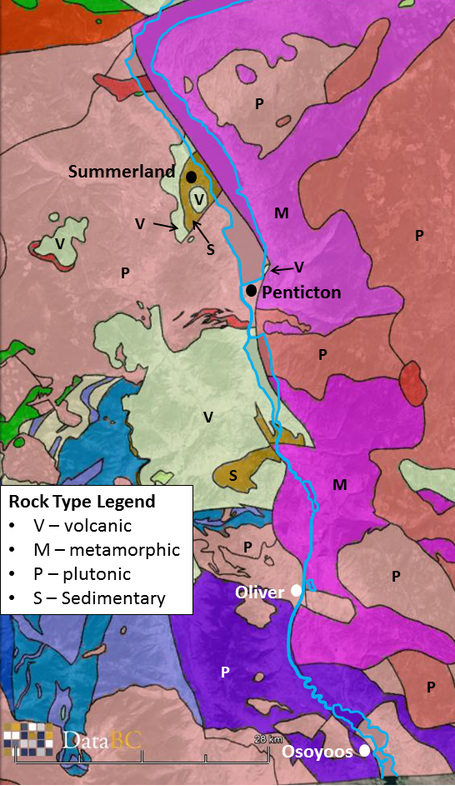